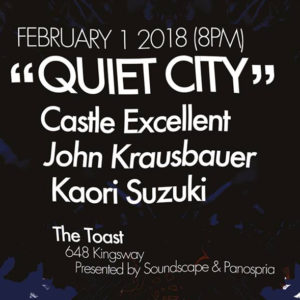 As part of their 2018 touring, Kaori Suzuki and John Krausbauer perform live alongside Castle Excellent at The Toast Collective, Vancouver B.C. as part of the excellent Quiet City series.

Quiet City is a series of concerts in Vancouver, focused on live performances of experimental, electronic and improvised music in a comfortable and intimate setting. Established in January 2010, they are now in their ninth year of programming.

She has performed her music in various settings in the west coast of America including numerous DIY venues and galleries, music festivals such as Debacle Fest, TUFFest, and the San Francisco Electronic Music Festival, and academic institutions such as Mills College, Stanford (CCRMA), and Berkeley Art Museum. She holds a master’s degree in Electronic Music and Recording Media from Mills College, and has a forthcoming album release in March 2018.