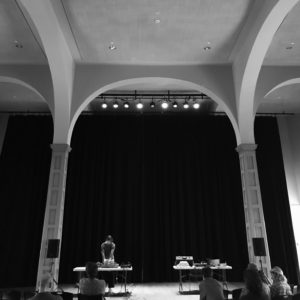 As part of their 2017 tour, Samson Stilwell and Roarke Menzies perform live alongside Norm Chambers, at the Chapel Performance Space, at Good Shepherd Center, Seattle. Part of the Wayward Music Series.

Emerging from a love of early electronics, concrete/tape music, soundtracks and early new age, Norm Chambers creates worlds of sound that touch on many elements and moods, from spatially motivated ambient to aspects of minimalist composition and improvisation. Chambers utilizes an array of synthesizer equipment to achieve his sounds, in addition to field sounds and occasional acoustic elements.