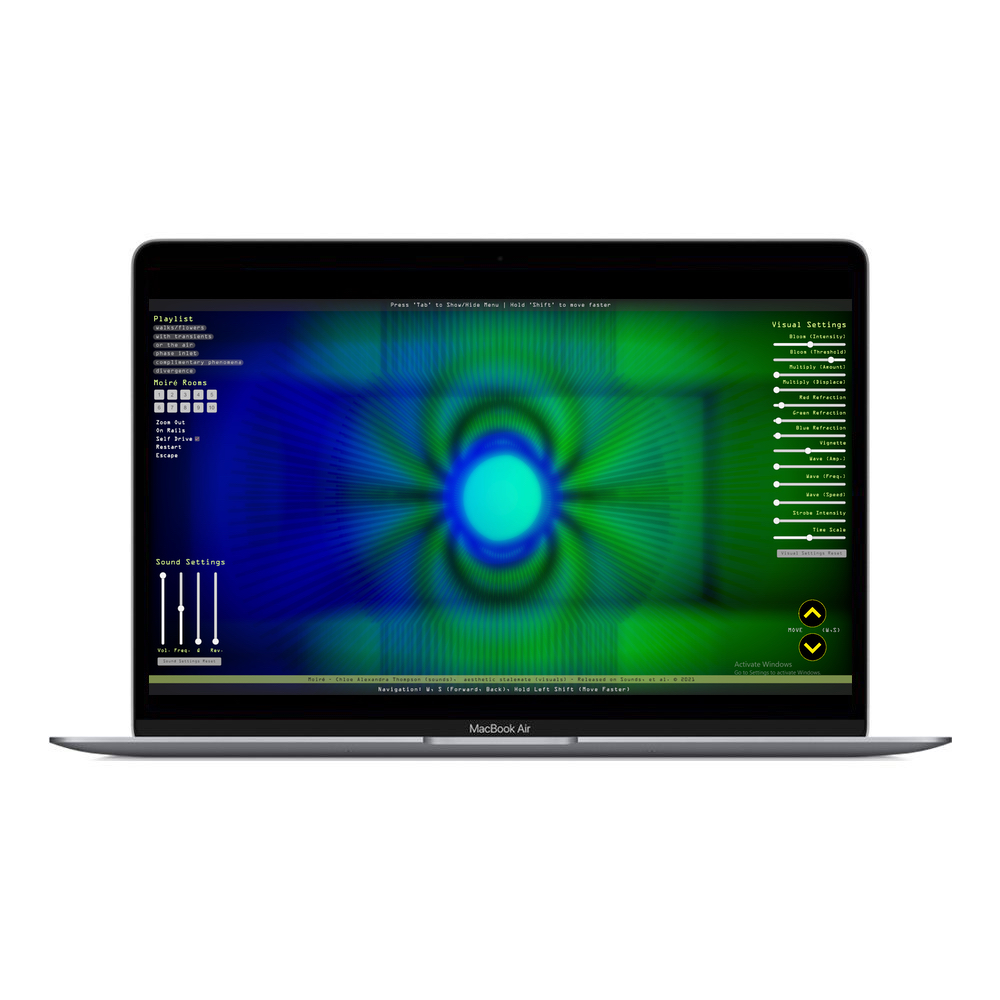 The new project from Chloe Alexandra Thompson and aesthetic.stalemate, Moiré was released 16th July 2021 through Sounds et al, as both an audio album, and a downloadable interactive virtual environment/music visualizer.

Moiré is an A/V work combining live processed field recordings, discrete audio frequencies, and distilled spatial design, presenting moiré patterns amidst a backdrop of transforming architecture. Through repetition of sound and visual elements viewers are enveloped in a transfixing landscape of abstraction. The collaborative duo use audio programming and 3D software to explore fascinations with psycho-acoustics, real-time virtual environments, spatialization within the stereo field, and sensory illusion.

In response to the global pandemic, the pair further virtualized their collaborative approach, creating novel bridges between audience, performer, sound, environment, and themselves. The resulting A/V experience is an uncanny interplay of connectivity and disassociation.

As collaborators working primarily through computer-based technologies, the pair questions how these forms of engagement change our interaction with sound and visual art, particularly during a time in which we’ve had few options other than those hosted within virtual space. Whilst much interaction and performance has been livestream-centered and remote, the game was developed as an alternate approach, encouraging the user to control and navigate their own experience.

Conceptually, the pair have drawn metaphors from the project’s overlapping binaries giving rise to deceptive feedback patterns. “The album visualizer serves primarily as a space of respite, contemplation, and play in a time of chaos and isolation.”
– aesthetic.stalemate & Chloe Alexandra Thompson

The visual environment was produced by aesthetic.stalemate (Matthew Edwards) at Xhurch in Portland, OR. The audio was recorded at Circular Ruin Studio and Pioneer Works in Brooklyn, NY. Mixed by Chloe Alexandra Thompson, Arjan Miranda, Ben Greenberg, Randall Dunn, and mastered by Rafael Anton Irisarri at Black Knoll.