(Music) For A Time And Space (Launch Party) 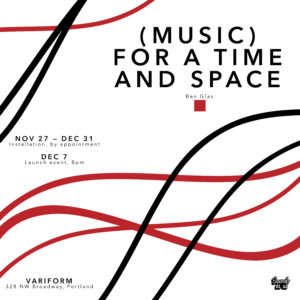 (Music) For A Time And Space provides a site-specific sonic experience. The work is a relativistic sound composition based on measurements taken at the Variform gallery, with three sources producing sound waves that interact with the space, creating various subjective tonal interactions for the audience.

The work questions the friction-based boundaries between listener and composer, authority and subject. Each participant is prone to have their own experience, and paradoxically compose the perception of all other persons in the space at Variform.