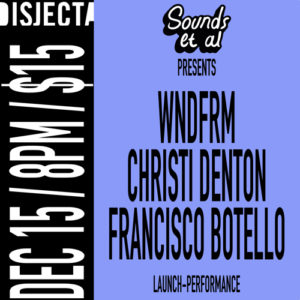 Expect to plunge into an evening of sonic art, presented in the beautiful space of DISJECTA.

wndfrm is Tim Westcott, a Canadian sound artist, musician and audio engineer currently based in Portland, Oregon. His recorded and performative work is characterized by heavily processed field recordings, tones, drones, abstract percussive elements, a wide dynamic range and an inquisitive, patient ear. Tim’s process is experimental, auto-didactic, and often oriented around a spatial experience. He has performed in the US and Canada, at various venues where listening is emphasized.

Francisco Botello is a sound artist from South Bay, San Diego now residing in Portland, Oregon. He is currently working with original field recordings to create soundscapes reflecting the environment they were collected from. His interest in environmentally influenced music was inspired by his experiences at his grandparents’ ranch in Mexico and traveling throughout Central America. He is now focused on the study and development of a career in sound ecology, acoustic ethnography and sound design.

DISJECTA is a non-profit contemporary art center in Portland, Oregon that builds ambitious programs that promote artists and engage communities.